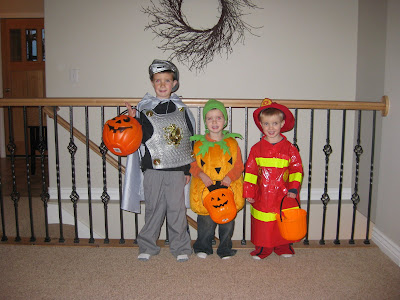 Our boys on Halloween... they were so cute and had such a great time trick or treating with dad. This was the first year that N and T decided what they wanted to be all by themselves. A wanted to be something really scary and eventually settled on the knight costume. Everytime T sees a fire truck on the street he thinks it's his fire truck and gets mad that someone else is driving it. From the first time I asked N what he wanted to be for Halloween he was determined to be a pumpkin and never waivered. Such cute boys!! Clint took the boys trick or treating and the boys did so good and made out like bandits. They were out tromping the streets for quite a while. I stayed home to pass out the candy, we have a fun neighborhood and we got a ton of trick or treaters. I also got to finish my book " A Thousand Splendid Suns" ... Loved it! 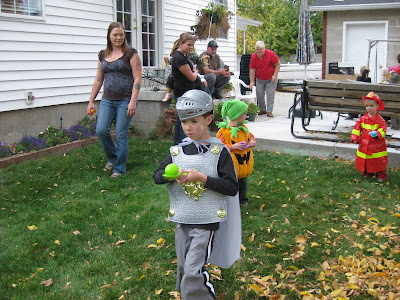 We also got to celebrate my niece zoie's birthday on halloween. That was fun because the kids had a costume party to go to on Halloween during the day. It was also so fun to see my sister Kasidi who now lives in Colorado. So our visits have been far and few between. A, N, and T also had so much fun playing with Zoie, they miss not being close to her. A won the spoon and egg race. 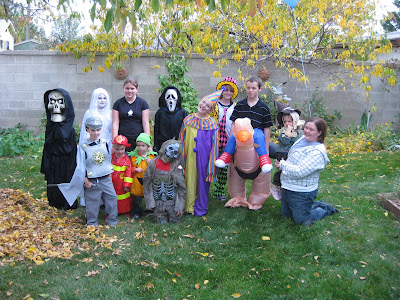 My nieces and nephews in their Halloween costumes. 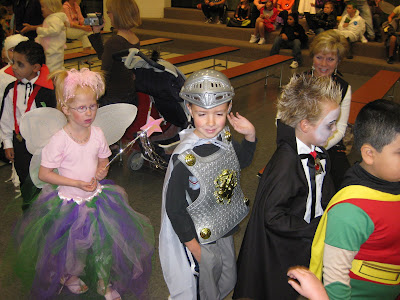 A in his first school Halloween parade.
Clint turned the big three four this year. I don't think he is too excited. However I think he looks as hot as the day I met him. He and I went to a comedy club for his birthday and to dinner. It was somthing we had never done before, as far as the comedy club goes. I really did not know what to expect but it turned out to be really fun and the comedian was really really funny. The boys had fun wrapping presents and making cards for their dad. We went and saw Madagascar with the boys for his birthday as well. Happy Birthday Babe!! 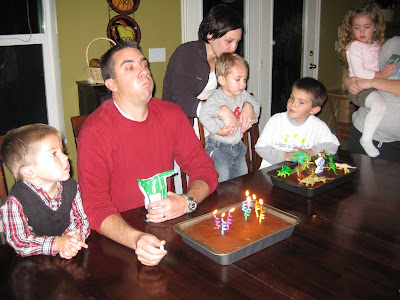 Clint celebrated his birthday with our Nephew Finn on his second birthday at Grandma Becky's house. Happy Birthday boys! 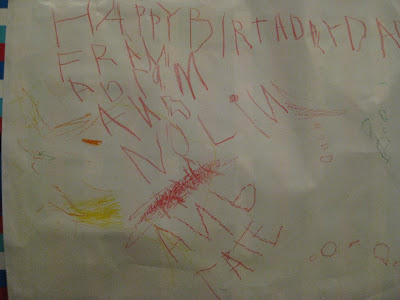 A wrote this card for Clint all by himself I didn't even have to tell him how to spell it. He is getting smarter and smarter everyday. What a good boy! 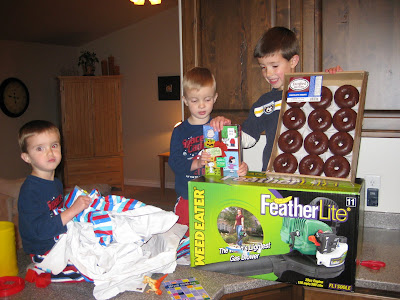 Dads loot!! He also got a bunch of biking stuff that he is really excoted about. This is the year of the triathalon.
Posted by ClinTeeny at 9:12 PM 8 comments:

ClinTeeny
We reside in the outskirts of civilization with our four boys that fill our lives with a certain spark. There are moments with them that leave us breathless, either from laughing our brains out, or trying to catch up with them in every direction. When we find time for each other it's always a party. We couldn't have asked for more.